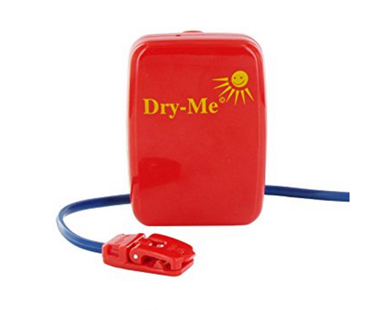 Summary: The DryMe is the second best bedwetting alarm system in the $50 price range. It is behind the DryEasy alarm in quality.

Fighting nighttime enuresis (bedwetting) is a regular battle for some parents and kids. The problem of bedwetting can endure into the teen years and can even be a problem for adults with nighttime incontinence. The DryMe bedwetting alarm system is a sub-$50 alarm that can help kids, teens, and adults stay dry every night.

DryMe features include 8 random sounds plus a vibration mode for ensuring discretion at sleepovers and among younger siblings. It operates on two AAA batteries. Some users reported that the attachment clip on the alarm and sensor broke easily, and that the battery door is not sturdy. This is one reason for its being ranked lower than the Wet-Stop3 in terms of quality.

The cable is 30 inches long and therefore fits most children with bedwetting problems. The cable connects to the alarm unit with a standard “phone jack”-type connector for a secure fit and to reduce the chances that the wearer will disconnect the cable while sleeping.

Problems reported in users’ reviews of DryMe include breakage of the battery cover tab, sensor, and alarm clips during the first month of use, the device going off on its own while not in use and dry, the clip not staying on the shirt, and the clip pulling off of the wire. Customer service has been actively monitoring and responding to online reviews with further instructions, troubleshooting tips, and offers to replace the units at no charge.

If the DryMe breaks there is a 1 year warranty on the alarm and 90 day warranty on the sensor. You just send email or call and DryMe will handle the issue with the device.

The DryEasy bedwetting alarm is a better option mainly because it detects urine faster and the components do not break as easily.