The DryBuddyFLEX Complete wireless bedwetting alarm system brings a lot of features to people battling nocturnal enuresis as caregivers and as patients. 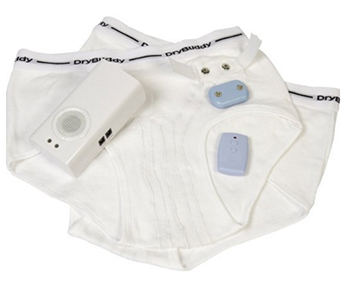 DryBuddyFLEX is a wireless system in that the sensor on the underwear is not connected by a wire to the alarm. Instead, the sensor transmits a radio signal to a receiver plugged into an electrical outlet. The alarm within the receiver sounds off to alert the wearer and caregiver.

The underwear itself contains the sensor, which is sewn into the fabric in a redundant way so that a break in any one wire has minimal impact on the effectiveness of the moisture sensor. In addition, the sensor can be magnetically attached to regular cotton briefs with a special “cap” device, so you don’t necessarily have to buy special underwear.

The reusable sensor is quick and easy to clean and maintain. The sensor is also very quick to detect when moisture is present and sounds the alarm instantly. It “knows” the difference between urination and the slower increase in moisture due to perspiration. The briefs are the only thing ever to touch the wearer’s skin because the sensor is attached to the outside of the briefs. 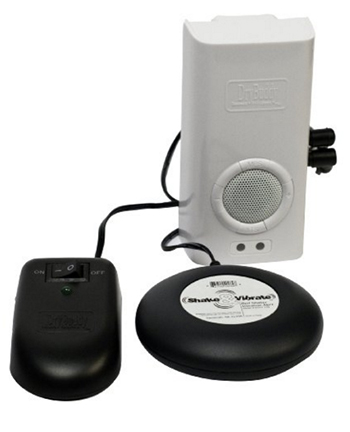 One really convenient feature of DryBuddyFLEX is the wireless remote control. Up to a distance of 90 feet, the remote can quickly turn off the alarm to avoid unnecessarily waking other sleepers while the caregiver works with the patient. It’s also great for avoiding fumbling in the dark for the wall outlet receiver to turn off the alarm.

If someone is a particularly heavy sleeper, the optional bed-shaker alarm can be combined with or used instead of the audible alarm.

The transceiver unit that comes with DryBuddyFLEX Complete plugs into a U.S. or Canadian standard 110 volt outlet and receives and re-transmits the alarm signal from the sensor and the turn-off signal from the remote. You can control the volume on each transceiver. You can also arrange a series of up to five transceivers such that they can be up to 110 feet away from each other, and overall increase the distance from the wearer to the caregiver. Additionally, the transceiver can be set to independent channels so as to enable the purchase of multiple systems for multiple users without interference between the alarm units. This is ideal in large houses, with multiple children, or in places of care of multiple patients who are placed far from a nurse’s station such as in nursing homes and hospitals.

The warranty for DryBuddyFLEX is for 1 year and it is registered with the FDA and FCC/IC. It is also ETL certified for the USA and Canada as well as RoHS “Green” compliant. It is eligible for insurance reimbursement through FSA and may even be covered by other health insurance.

In comparison, the Rodger has all the same features of the DryBuddyFLEX, except:

Because of its additional features, we recommend the DryBuddyFLEX instead of the Rodger wireless bedwetting alarm system. You will get more features and convenience for less money with DryBuddyFLEX than with Rodger.