How effective the Rodger alarm is in preventing bedwetting and how it compares with other products on the market. 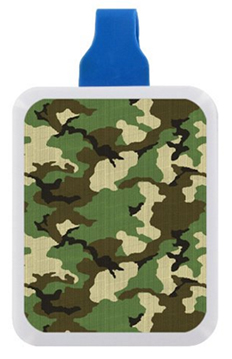 What sets apart the Rodger alarm from the rest of the pack is its unique sensor, which is sewn directly into a pair of underwear worn by the person overcoming enuresis. Instead of a clip that attaches to the undergarment, sensor wires run throughout the underwear. Whatever position the wearer or his or her undergarment is in, the sensor wires are very likely to catch the first drop over a sensor attached via clip.

The invisible sensor wires connect to a pair of press studs in the waist band to which a small transmitter is attached. The transmitter, which is powered by a small battery, communicates with an alarm receiver that is plugged into a standard wall outlet in the sleeper’s room. As soon as the wearer begins to wet, the alarm goes off and, because the wireless receiver is across the room, the person must get up to turn it off by pressing a reset button, resulting in a wakefulness cue to go to the bathroom and finish urinating. Over time, this routine trains the wearer to stop wetting the bed.

The Rodger alarm does have variable volume settings and 8 alarm tones like most other enuresis alarms. 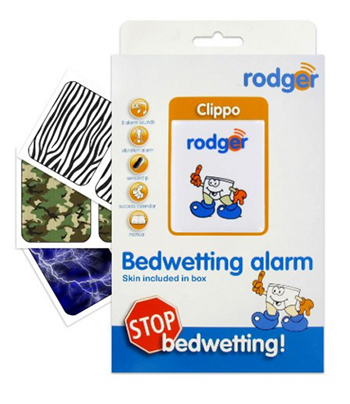 Even though the concept of sewing the sensors into the underwear and connecting them to a wireless transmitter is a great concept in theory, a problem occurs when the transmitter fails due to a drained battery. The battery in the Rodger wireless transmitter is a CR2032 type watch battery, but it is not as simple to change as the Wet-Stop3 AAA battery. And, the Rodger transmitter watch battery life being of lesser capacity than a AAA battery, the interval between battery changes varies according to the amount of time it takes the wearer to turn off the alarm. The longer it takes to deactivate the transmitter/receiver alarm loop, the less the battery will last in comparison to AAA batteries.

Complaints about the Rodger alarm are mostly about inconsistencies when it comes to sound sleepers not awakening, the system not working 100% of the time with one-drop accuracy, and instructions being sloppy and vague. Such complaints are not found with the DryEasy alarm.